Join Us and Let’s Work Together 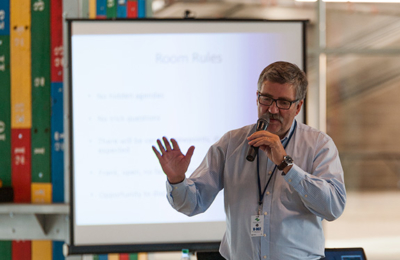 “We’re entering a new era with new expectations. And company leaders must be transparent about expectations and tolerance. This is the first step toward developing a healthy workplace where everyone can feel safe.”

If you’ve ever watched prime-time television, you’re familiar with the Hollywood version of “Investigation.” However, there’s a big difference between the television world and the real world of workplace investigations. In the latter, investigation is defined as “a systematic and thorough examination or inquiry into something or someone and the recording of that information in a report.”

Rod Buckingham, the CEO and founder of Buckingham Security, has spent much of his distinguished career in the real world of investigation, both as a major crimes investigator and as the leader of an investigative team. Although most investigations have some common denominators, there are nuances, too — different cases require different areas of expertise. For his team, Mr. Buckingham has assembled some of the best investigators in the profession, men and women who were previously under his management or are known for their proficiency to conduct investigations, including former law-enforcement personnel who have extensive experience in all types of in-depth investigations in both the public and private sector. Collectively, they have more 150 years of experience in undercover work, background investigation and pre-employment screening.

In addition, the Buckingham investigative team includes a file manager, who coordinates the wide array of resources for the investigators, and an analyst who gathers incident reports, witness statements, source interviews and other intelligence. All of that information is then synthesized and made available, in a timely manner, as a detailed analysis of the investigation.

In general, there are five major categories of WorKplace investigations:

The team at Buckingham Security has extensive experience in all five categories of workplace investigations.

Q: How should my company be preparing for the requirements of Bill C-65?
A: “It begins at the top,” says Rod Buckingham, the president and founder of Buckingham Inc. “CEOs and human resources directors of federally regulated Canadian businesses must work together to develop a comprehensive code of conduct on how to handle disputes in the workplace. And it must be done proactively, not reactively. The law is already in place, which is why we’re encouraging companies to develop and implement these policies and procedures as quickly as possible. Subsequently, they must be communicated to management and staff, and all of the requisite training must be made available. By being proactive, companies can effectively manage disputes before they become problematic.”

1. Develop written procedures that ensure all workplace complaints are handled in a formal and consistent way.

Previously, it was standard for employers to address workplace conflict and harassment informally. Although dispute resolutions can be handled informally, the complaint process must be formalized and predictable — it must follow a set procedure. If the complaint process is not formalized, resolutions can become unclear and may resurface at a later date, leading complainants to believe they were not taken seriously.

2. Assure employees that the intent of the new procedures is to ensure a healthy workplace environment for everyone.

The investigation and resolution of a harassment complaint is, by design, a restorative process. Although there may be occasions when a determination is made and a discipline directed, the focus of the process is to ensure that the workplace environment improves.

3. Create a culture in which management makes it clear that all employees have a right to a harassment-free environment.

It’s important for employees to understand that management will not tolerate any form of harassment, and that all harassment will be stopped, investigated and resolved in a timely manner.

Establish, implement and communicate your company’s policies and procedures before harassment becomes a problem.